2 Arizona Congressmen Save Passenger’s Life While Flying to D.C. to Vote on COVID-19 Relief Bill 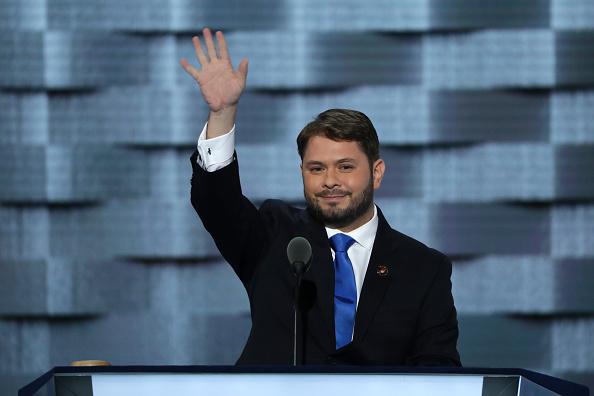 PHILADELPHIA, PA - JULY 27: U.S. Rep. Ruben Gallego (D-AZ) delivers remarks on the third day of the Democratic National Convention at the Wells Fargo Center, July 27, 2016 in Philadelphia, Pennsylvania. Democratic presidential candidate Hillary Clinton received the number of votes needed to secure the party's nomination. An estimated 50,000 people are expected in Philadelphia, including hundreds of protesters and members of the media. The four-day Democratic National Convention kicked off July 25. (Photo by Alex Wong/Getty Images)

It took bipartisan action in Congress to pass a coronavirus relief bill last week–and to save the life of an American Airlines passenger. USA Today reports that two congressmen from Arizona who happened to be on the same red-eye to Washington, D.C. this past Friday leapt into action when a fellow flier fell ill on their flight. Democrat Ruben Gallego, an ex-Marine with combat medical training, answered the call when flight attendants asked for help.

He then remembered that Republican Paul Gosar, a dentist, was also on board and woke him up to help. “I thought it might be someone had collapsed because of the coronavirus,” Gallego later told The Arizona Republic. “Paul diagnosed him as having some blood sugar stuff. The guy was fine, but people were shaken up.” Gallego also tweeted early Friday, “I am now an fully awake on my red eye to D.C.! But thank you to Rep. Gosar for answering the call when the flight attendants asked for anyone with medical background! He answered when a young man passed out suddenly on this flight!”

After voting for the relief bill, Gallego later added, “It has been a hell of 24 hours…now boarding the flight back to Phoenix. I promised Gosar no drama.”

September 16th, 2021
View full playlist
Connect With Us Listen To Us On