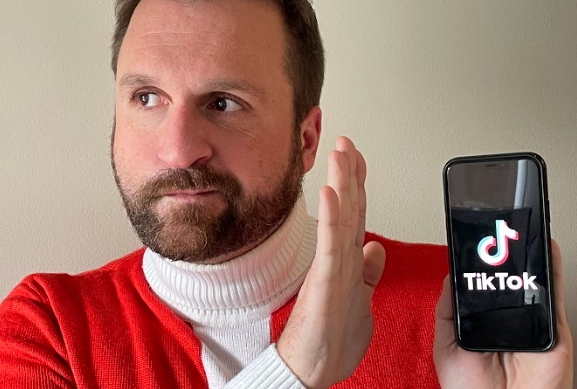 In my job, I am both expected and required to keep up with pop culture.  I’m technically an “influencer,” which means I need to know what’s cool, foresee what’s going to be cool, and (laughably) reinforce their cool-ness.

TikTok is cool.  I know this, because I see the clips that are passed around OUTSIDE of TikTok, and I find them funny.  And watchable.  And cool.

But I won’t be going on there.  Why?  It wouldn’t be cool anymore if I did that.

Same rule for TikTok.  That space is NOT for me.  It’s a place for young people to go and share their ideas and their personalities with eachother.  It’s a place for them to gain social skills and learn cool behavior from their peers.  There’s something beautiful about it.  Especially these days, when kids shouldn’t really be face-to-face with eachother…  they need a space they can go and interact with other people their own age.  That’s what TikTok is about.

If some of it spills out?  Sure, I’ll enjoy that.  If you see something cool on TikTok and share it on Instagram?  Or YouTube?  I’ll watch it.  I enjoy those compilations.  There’s legitimately creative and funny young people.  And I feel safe clicking “like” on those…  because they’re on my platforms.  I was there when Facebook was invented.  I was there when Instagram was invented.  I can’t claim to have been there with TikTok was invented, so I’m gonna stay off it.

Basically, it boils down to this…  I want to do for TikTok what the generation before me did NOT do to Facebook.  For a while, Facebook was great.  It served the exact purpose that they say they still want…  to connect people.  But these days, it kinda sucks.  It’s filled with hate, and it’s commercial (not necessarily bad) and fake (BAD), and it isn’t rooted in reality.  Instagram is slightly less toxic, but it isn’t real either.  TikTok isn’t at ALL real, but it’s not posturing like it’s supposed to be.  It’s just a place for goofy shit, and I respect it too much to taint it.

Also, this is not to say that people past a certain age shouldn’t be on there.  There are several people I know who are my age and who enjoy the hell out of TikTok.  And that’s fine.  Just don’t mess it up.  That’s the new hotness, and if we’re not careful, it won’t be anymore.

Truth be told, I’m a fairly cool 41-year old.  I have a youthful heart, I can still make anybody laugh, and I like to have a good time.  But most of all, I respect things that are not for me.  Enjoy yourselves TikTokkers…  I’ll be over here if you need me.