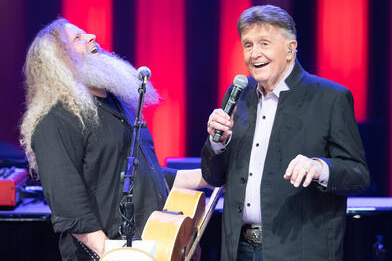 Country singer-songwriter JAMEY JOHNSON was surprised this past Saturday night (3/19) with an invitation to become the newest member of the Grand Ole Opry . Johnson was performing on the OPRY stage in a writer’s round with longtime OPRY member BILL ANDERSON and producer/songwriter BUDDY CANNON when Anderson extended the invitation. Watch the moment here.

Anderson said, “JAMEY, you made your OPRY debut 17 years ago and you’ve been a frequent guest many times. But OPRY management told me to tell you that this is going to be your last guest appearance.” A bemused JOHNSON quickly replied, “Well, I’ve been kicked out of a whole lot of places” before ANDERSON went on to explain, “The next time you appear on this stage you will be the newest member of our OPRY cast and family.”

JOHNSON then said, “I really don’t know what to say except the obvious. I love Country music. I would have never moved here if it wasn’t for that; for the OPRY keeping it alive and for the fans. I love you. Thank you.”

Added ANDERSON, “The OPRY’s going to be a better place because you’re a part of it.”

An induction date for JOHNSON will be announced soon.