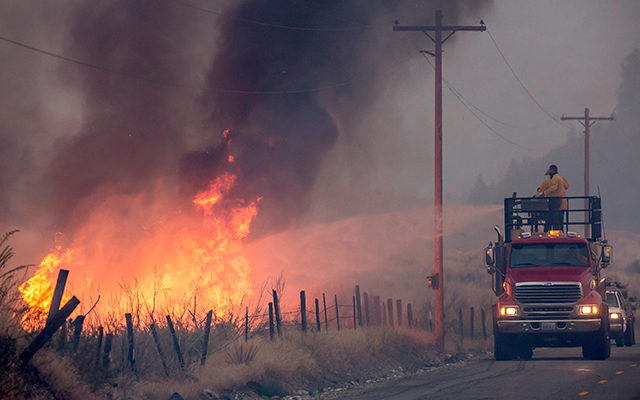 PORTLAND, Ore. — FEMA reports more than 25,000 claims have been filed by homeowners affected by Oregon’s historic 2020 wildfire season with over $30 million in assistance granted.  The fires killed nine people and one person has still not been found.  More than 4,000 homes were destroyed along with at least 1,400 other structures.

There were more than 2,000 fires on state lands this year.  At least six burned more than 100,000 acres.  More than 1.2 million acres burned across Oregon this year, doubling the 10-year average of approximately 557,000 acres.  The fire season far surpasses 1933, the year of the first Tillamook Burn.  Fires on lands protected by ODF burned over 13 times the yearly average.

More than 7,500 personnel were assigned to the fires after Labor Day with resources from 39 states and multiple Canadian provinces.  Approximately 1,000 members of the Oregon National Guard supported firefighting efforts with aviation and ground crews.

Governor Kate Brown toured the devastation from the Riverside, Dowty Road, and Unger fires in Clackamas County on September 28th.  She said: “It’s hard to believe the magnitude of impact these fires have had on Clackamas County, and I know for many who live here the destruction is unfathomable.  As I continue to visit communities around the state that have been hard hit by these wildfires, my commitment strengthens—to secure the resources necessary to help rebuild an even stronger Oregon.”

Today I saw the destruction firsthand caused by the Riverside, Dowty, and Unger fires, and got a chance to thank the dedicated firefighters who are continuing to make great progress toward containment. If you’ve lost your home, please apply for support at https://t.co/xNWVMeyn17. pic.twitter.com/ApCvBs2OXp

Related | KXL Exclusive: Behind The Scenes Of The Riverside Fire

Governor Brown provided an update on the wildfires on September 23rd.

The Governor visited areas damaged by the Almeda Fire in Southern Oregon on September 21st.  The fire burned 3,200 acres, devastating the towns of Phoenix and Talent.

.@ORStatePolice Trooper Cameron Wiggett put in 50 hours of overtime on the Almeda fire, evacuating two children who were separated from their family & two adults with disabilities safely to a Red Cross site. He inspires me, as do all the heroic and selfless first responders. pic.twitter.com/zS2flWQopa

Wildfires have ravaged Oregon and Washington forcing evacuations all over

The Red Cross has been there to help alleviate human suffering.

How can you help?  donations are the best way to support the American Red Cross, as they support those impacted by these wildfires.

Just visit redcross.org/donate  text the word REDCROSS to 90999 to make a $10 donation.

The map below shows some of  the wildfires between Oregon & Washington 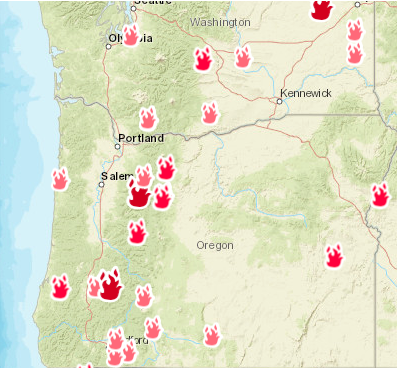