PORTLAND, Ore.–Part of a very old and well maintained Cemetery in Southeast Portland is home to Portland Fire Fighters. Don Porth retired from Portland fire and rescue after 27 years of service. Somewhere along the way he fell in love with the rich history of the department. He helps keep records on every firefighter buried at Lone Fir Cemetery. Portland started out as a volunteer fire department in 1853. it was then called vigilance hook and ladder. The portion of the cemetery dedicated to Portland fire fighters was gifted in 1862.  Any current firefighter can request burial at Lone fir . There’s no cost involved. Don Porth, pictured here  is wearing the fire bureau’s dress uniform from about 1910 to 1960.  if the people could speak beyond the headstones so many stories would be told . 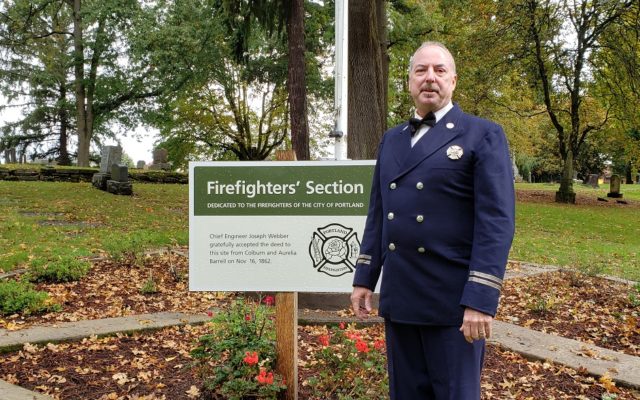 There are three other places to visit and learn about Portland Fire fighters the Belmont Learning Center and the Jeff Morris/Neil Heesacker Fire Museum located at Fire Station #1 Downtown Portland Fire Fighter Park at 18th and West Burnside.  Coming in the future the David Campbell memorial near fire station 21.

The Campbell Memorial is currently located at the corner of NW 18th and Burnside and is maintained by the David Campbell Memorial Association. Constructed in 1928, the memorial is named after Fire Chief David Campbell who lost his life on June 26, 1911 fighting the Union Oil Fire in SE Portland. On each anniversary, Portland Firefighters, city officials and members of the public gather in the small park to remember the firefighters who have lost their lives in service to the citizens of Portland.

The Campbell Association worked for several years with a broad coalition of design professionals, businesses and the City of Portland to develop a plan to expand the existing memorial and accommodate more members of Portland Fire & Rescue.  When no viable option emerged from that work, a new memorial site was soon identified on PF&R property along the Eastbank Esplanade.

In the fall of 2009, The Campbell Memorial Association partnered with Portland State University to conduct a design competition for a new memorial. A winning design was selected from the design submittals and was unveiled to the public in 2010.  In 2015 Portland saw the completion and reopening of Fire Station 21, setting the stage for the final phases of the memorial development, funding, and construction.  davidcampbellmemorial.org for more information and to make a donation.

Note: In 2010 the existing Portland Firefighters memorial joined over 500 Portland properties on the National Register of Historic Places. The Campbell Memorial Association is committed to working with historic preservationists, neighborhood groups and citizens to ensure the site continues to serve the community for years to come. Portland Fire and Rescue and the Campbell Association will continue their role as stewards for the existing site when the new memorial is realized.