Middle School Students from Harriet Tubman Middle School and youth climate leaders from Sunrise Movement Portland gave testimony today Joint Policy Advisory Committee on Transportation (JPACT) Meeting held at the Oregon Metro building in Northeast Portland on Thursday, October 17. The Oregon Department of Transportation is slated to give a presentation to JPACT members from around the region, a body that includes Portland Commissioner Chloe Eudaly and Multnomah County Commissioner Jessica Vega-Pederson, and the youth climate leaders are speaking up to oppose proposed freeway expansions . “I  will be 34 years old by the time my climate fate is sealed,” said 23-year-old Anna Kemper, an organizer with Sunrise Movement. “Widening freeways and investing in increased road capacity for single occupancy vehicles, as ODOT is proposing in their CBOS presentation today,  is not prioritizing safety for me or my generation.”

Anna will be joined by eighth grade Harriet Tubman Middle School students Adah Campbell and Charlet Andersen. ”I need Metro to invest in green new policies, not extra auxiliary lanes whose only purpose will be to increase congestion, worsen air quality, and further deteriorate our planet for future generations. This is an issue of valuing profit over students, and it is disappointing to think our legislators and lawmakers would prioritize expanding freeways over the wellbeing of Portland’s youth.” 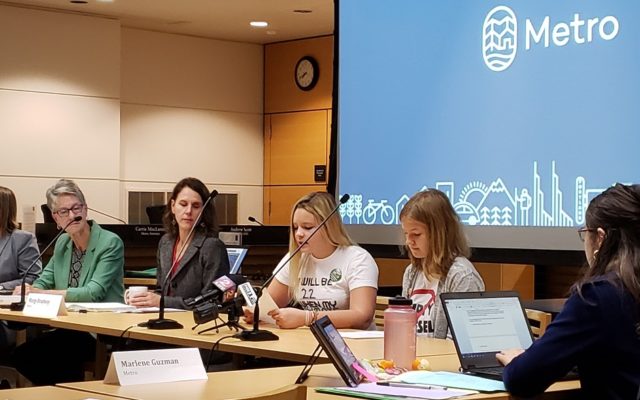 The No More Freeway Expansions Coalition, founded in 2017, has worked to oppose ODOT’s plans to widen freeways across the Portland Metro Region. The organization has most notably forced ODOT to conduct an Environmental Impact Statement on the Rose Quarter Freeway Expansion Project, caught ODOT brazenly misrepresenting their traffic projections to the public, and organizing community members in support of sustainable transportation alternatives.

ODOT’s Corridor Bottleneck Operation Study (“CBOS”) proposal requests funding from JPACT to move forward with plans to widen Highway 217, I-205, and Highway 26. The agency will be presenting their proposals to the advisory committee with a vote scheduled for the November meeting.

“These youth climate activists are justifiably angry,” said Aaron Brown, with the No More Freeway Expansions Coalition. “They’ve been watching youth climate activists like Greta Thunberg and Isra Hirsi, and they’re hoping to hold the agencies accountable who are deliberately attempting to squander their future just to widen a few more freeways. They’re the ones acting like adults – I hope our elected officials are adult enough to listen and respond to their concerns about the future of the planet they’ll inherit.”