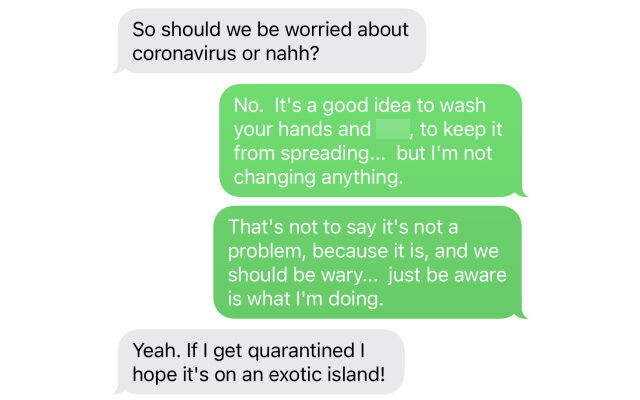 Can you believe it?  The first confirmed case of COVID-19 in the United States was January 20th, 2020.  That was two years ago today, and it was just up the road in Seattle.

I remember when it happened.  I’m sure I did a headline that day along the lines of, “it’s here.”  Then we watched one case become a handful, and after that, it was off to the races.

I just went through my texts from back then, and on March 20th, I had a close friend ask me, “should we be worried about coronavirus?”  My response was, “no, I’m not going to change anything.”  At least I recognized it was worrisome, but I had no idea what it was gonna do.  It’s killed over 800,000 Americans.  It’s completely upended the lives of countless people (including me; I lost my career!).  It continues to spread, and now it’s in version 3.0, which is even more transmissable!

And frankly, I think we’re mostly on the downside.  Once my kids were vaccinated, I felt like my part had been done.  I had done all I could to keep the people I was in charge of safe from its most disastrous effects.  After that, I stopped feeling responsible for defending the world…  I felt like I could re-emerge.  I know this isn’t a universally recognized position, but I know I’m not alone.

I still feel we should take measures to slow it down.  Headlines just dropped today that emergency rooms in Oregon are reaching capacity, and people are in real danger of not being able to get medical attention for everyday maladies.  That’s a disastrous effect, and it is a directly avoidable consequence of our COVID apathy/fatigue.  We still need to be vigilant.

But damn, I can’t wait to be done with it all.  I’m sick of having to plan my weeks around my elderly relatives visiting.  I’m sick of not seeing anybody when I come to work.  I’m sick of wearing masks.  I’m so done with it.  I’m in; I’ll do what the experts recommend.  But damn…  can we get to the end, please?