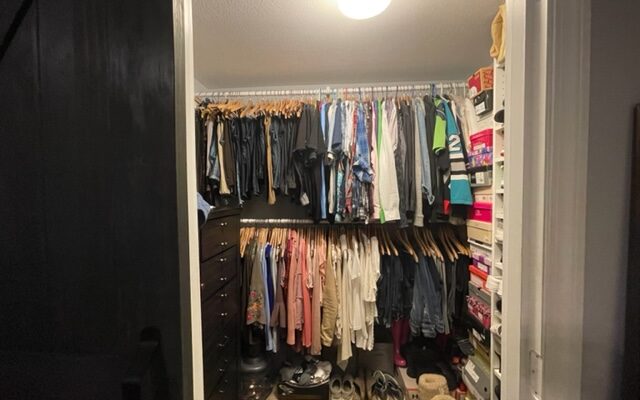 As I gear up to head to Vegas for the 57th Annual Academy Of Country Music Awards on Monday, I had to pick out a suit to wear and realized I don’t have a shirt that is right for the event, but if you look in my closet you may say what are you talking about you have a ton of dress shirts Danny ?   My wife Kimmy even said she needs a new dress for the show,  yet she has 15 gorgeous dresses hanging in the walk-in!  What ?

Well Turns out the average person has nearly $300 dollars of unworn clothing hanging in the closet that they have never worn and is collecting dust. YUP It’s True

Despite a closet full of old clothes, people complain that they have nothing to wear six times a month. The new finding comes from a recent poll from the United Kingdom surveying over 2,000 British adults. One notable finding was that people had an average of $268.44 worth of outfits that had never been worn.

About 8 to 10 people said they regularly wear the same clothes over and over and 6% of adults said they wore everything in their wardrobe at least once.

More than half of the people chose not to wear certain clothes. This was not because the clothes no longer fit or were ugly. Rather, it was because they were buried under other clothes.

Another 20% said they kept clothes for sentimental reasons — even if they have never worn them. 65% of adults said some unworn items still had tags on them.  OOPs I’m Gulty

Good News It’s Almost time to Spring Clean and get rid of the clothes that are 5+  years old and  refresh to make you feel good. Like I say A Little Retail Shopping Therapy always makes me feel good