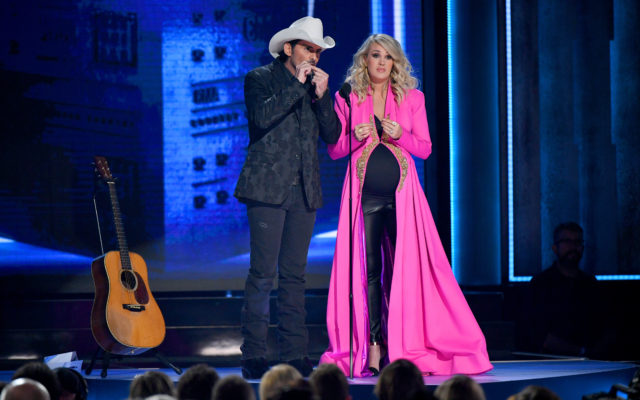 NASHVILLE, TN - NOVEMBER 14: (FOR EDITORIAL USE ONLY) Brad Paisley and Carrie Underwood speak onstage during the 52nd annual CMA Awards at the Bridgestone Arena on November 14, 2018 in Nashville, Tennessee. (Photo by Michael Loccisano/Getty Images)

Reunited and it feels so good! Longtime CMAs co-hosts Brad Paisley and Carrie Underwood will share a stage again–in a socially distanced way, of course–whey they perform at the Grand Ole Opry on Saturday, September 5.

The two also earned a joint hit in 2011 with their duet “Remind Me.” More recently, Paisley dropped new single “No I in Beer” earlier this year (Underwood cameos in that song’s video), while Underwood is set to release her first-ever Christmas album, My Gift, on September 25.

The audience-free Opry performance will be broadcast live on CircleTV starting at 8 p.m. ET/7 p.m. CT, as well as on Circle’s YouTube, Facebook and Twitter platforms. Meanwhile, Jon Pardi, Runaway June and Pam Tillis perform at the Opry this coming Saturday, August 22.