Marion County, Ore. – I-5 South is still shutdown this morning following a fiery crash involving two semis north of Woodburn, and some drivers have been stuck on the freeway for hours. Crews hope to reopen some lanes for this morning’s commute, check back for updates on this developing story. A semi truck pulled over to the side of the freeway Tuesday afternoon two miles north of Woodburn. State Police say that’s when a second semi sideswiped the truck and both went up in flames. ODOT’s Don Hamilton says there’s some serious damage to the road, and crews may have to do some repaving before the freeway can be fully reopened. We are told one of the truck drivers 51-year-old Rex Hollopeter was airlifted to the hospital. No word on his condition this morning. 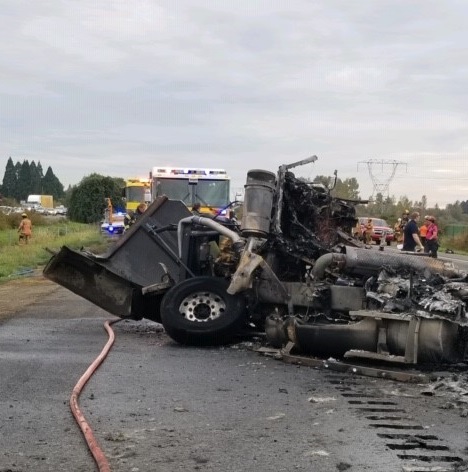 Read more from ODOT – Southbound Interstate 5 remains closed at exit 278 after a fiery crash Tuesday afternoon involving two semis near milepost 274. The last truck remaining at the scene will be towed as soon as crews finishing downloading lumber from the trailer. The road has sustained significant damage from the force of the fire and the diesel fuel that spilled from the trucks. ODOT hopes to re-open the left and middle lanes before the Wednesday morning commute but will do so only if the lanes are safe. The right lane sustained the most damage and may stay closed for an extended period until conditions are sufficiently dry to allow re-paving. As a detour, southbound travelers can Oregon 99E south and rejoin I-5 at Woodburn.

On Tuesday October 15, 2019 at about 3:57 PM, OSP troopers and emergency personnel responded to a serious injury crash involving two Commercial Motor Vehicles on I-5 southbound at about milepost 273.

HOLLOPETER was transported by air ambulance to Legacy Emanuel Medical Center in Portland for serious injuries.  Both Gagandeep SINGH and Baljit SINGH were outside of their truck and were uninjured.

Southbound lanes of I-5 are expected to be closed indefinitely until ODOT personnel can assess the damage to the roadway.