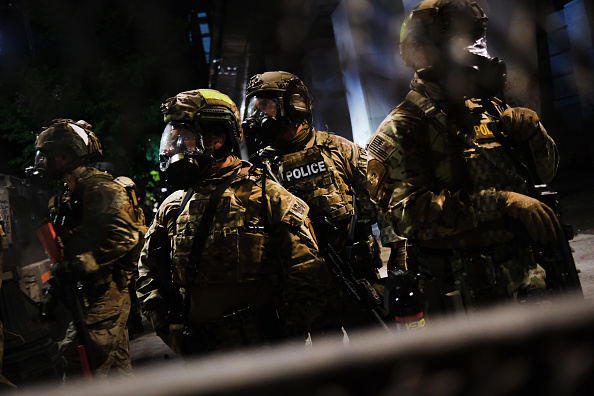 The Trump administration has started talks with the Oregon governor’s office and indicated that it would begin to draw down the presence of federal agents sent to quell two months of chaotic protests in Portland if the state stepped up its own enforcement.

Before departing Wednesday for a trip to Texas, President Trump insisted federal troops would not leave Portland until local authorities “secured their city.”

Governor Kate Brown made the announcement via her twitter:

After my discussions with VP Pence and others, the federal government has agreed to withdraw federal officers from Portland. They have acted as an occupying force & brought violence. Starting tomorrow, all Customs and Border Protection & ICE officers will leave downtown Portland.

“The federal occupation of our community has brought a new kind of fear to our streets. Federal agents nearly killed a demonstrator, and their presence has led to increased violence and vandalism in our downtown core. The daily coverage of their actions has distracted our community from the Black voices at the center of this movement, and the urgent work of reform.

I appreciate Governor Brown’s leadership in this discussion and her willingness to step in with State resources. The Governor and I agree: Oregon resources, expertise, and values are sufficient to manage Oregon issues.

The Oregon State Police, Multnomah County Sheriff’s Office, and Portland Police Bureau will continue working together to keep Portlanders safe, and the Governor and I have given clear direction: we expect that they will continue engaging only if there is violent criminal activity.

For nearly two months, many thousands of Portlanders have committed to conversation and action centered on police and criminal justice system reform in our community. Local and State leaders have taken meaningful steps. And we are poised to do more.”

June 24th, 2021
View full playlist
Connect With Us Listen To Us On